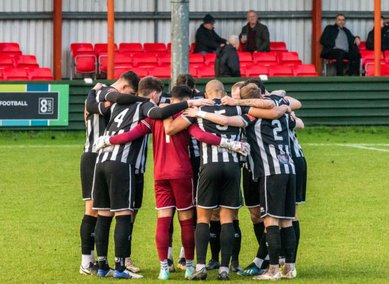 We got back to winning ways with an excellent 3-0 win away at local rivals Northwood, a scoreline which perhaps did not do justice to the home team who belied their lowly league position with a very capable first half performance. Our side showed three changes from that which had been beaten at Bracknell Town. Edon Pruti replaced the unwell Andy O’Brien at full back, Kyle Watson came in on the left hand side of midfield to replace suspended Sam Saunders whilst Tomasc Siemienczuk replaced leading goalscorer Ogo Obi who dropped to the bench. He was joined on the bench by skipper Harry Rush recovering from Covid.

Before an excellent crowd of 255, Northwood were quickly into their stride and inside the opening fifteen minutes, Hugo Sobte made a fine save to turn Yiannis Constantinou’s shot over the bar and then a brilliant run from the half way line by Micah Jackson was finally crowded out when he was well within shooting distance. At this stage of the game, Northwood were the better side with the majority of their side looking very comfortable on the ball but gradually we got more of a foothold in the game and we might well have been awarded a penalty kick when George Nicholas found Dan Carr on the right. Dan played the ball into the path of Jack Hutchinson who seemed to be brought down from behind but referee Tolu Sangowawa turned down our appeals.

As half time approached we became more and more dominant and took the lead two minutes from the break, Kyle Watson played Tom Collins through on goal. Dan Hosier made a great save to block Tom’s first effort but he was unable to prevent Tom from putting the rebound back into the net.

We dominated most of the second half with Northwood seemingly running out of steam and both Hutchinson and Massimo Giamattei missed good chances before we scored again ten minutes into the half when Dan Carr’s flighted free kick was headed home by Calum Duffy. Shortly after Ogo came on to replace Tomasc and he was instrumental in our third goal as his cross from the left was tapped home from close range by Collins.

We were now in complete control with Hugo so much involved in the first half now a mere spectator between our sticks ! Harry Rush came on to replace George Nicholas and with just ten minutes to go, Trevan Robinson replaced Tom Collins, denying Tom what might have been a hat trick as not long after his departure, Trevan was brought down as he turned swiftly in the Northwood penalty area and this time the referee had no hesitation in pointing to the spot. Ogo stepped up to take the kick in Tom’s absence only to see Hosier make a great save diving to his left and shortly after the final whistle was blown.