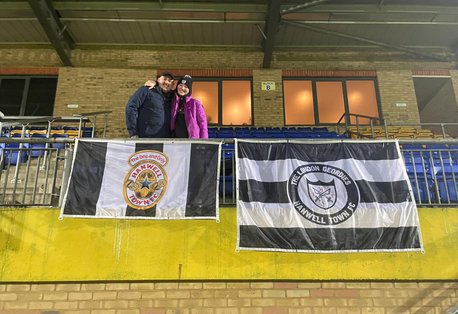 Back in September, these two sides scored eleven goals between them in a 6-5 epic. Hanwell fighting back to win despite them being four goals down after just seventeen minutes. Few would have envisaged that in the return game that there would be an even bigger goal tally but so it proved as Hanwell won 12-0, their largest ever win when playing at Step Four. It was a sign of the changing times at Staines that in their starting line up for this evening game that there were only four players and a substitute who were involved in the earlier meeting at Hanwell.

Fielding an unchanged side from that which had beaten Tooting & Mitcham we made the perfect start, opening the scoring in the sixth minute. An excellent move down the right flank culminated in Jack Hutchinson cutting in from the by line and pulling the ball back into the path of Sam Saunders who had a tap in from close range. We went two up a minute later when a long ball down the right found Tom Collins in space and his cross into the goalmouth was met by Massimo Giamattei who scored his first ever goal for the club. In the thirteenth minute we went three up as Tom latched onto a through ball from Sam to race into the penalty area before firing past the stranded Staines keeper, Joe Ringer, into the far corner or the net. Completely in command with Hutchinson, Saunders, Harry Rush and George Nicholas constantly opening up the Staines defence down the right flank it seemed likely that we would score with almost every attack and Ringer did well to turn aside a fierce shot by Sam after yet another excellent passing movement down the right.

Minutes later Ringer tripped Harry as he raced into the goalmouth and referee Rhys Battye had no hesitation in pointing to the spot. Goal four seemed inevitable but Tom blasted the spot kick over the bar. However our fourth goal was not long in coming with George and Harry again linking up and Tom was on hand to poke the ball into the net as the ball was crossed into the goalmouth. Ringer then made a great save to turn a pile driver from Harry over the bar but could do little about our fifth goal scored in the forty first minute as from a short corner on the right, the ball reached Edon Pruti who with his right foot drilled the ball into the Staines net before rushing off to celebrate what was his first goal for the club since his winning goal in The Middlesex Senior Cup Final some eight months previously. Just prior to the half time whistle, Staines almost pulled a goal back. From a corner kick, Dan Carr headed the ball of our goal line, Hugo then made a great save to block the follow up shot and a further shot was blocked before the half time whistle was blown much to the relief it seemed for the home side.

Staines made two substitutions at the interval whilst we made just one with Ogo Obi coming on to replace Tom Collins. Six minutes into the second half we scored our sixth goal and arguably our best goal of the evening. A great individual run by Sam and then an excellent one two with Harry culminated in Sam flicking the ball into the Staines net over the helpless Ringer from point blank range. Dwayne Duncan then got into the act with a good ball into the path of Ogo who made it seven and the eighth was not far behind, a through ball by Sam finding Harry through on goal and after rounding Ringer he stroked the ball into the empty net. We made our second substitution with new signing Salhin Abubakar replacing Kyle Watson with Massimo dropping back into Kyle’s left back position.

It was not long before Salhin had scored his first goal for the club as yet another great move down the right saw Hutch feed Dan and Dan’s low cross was turned home at the far post .

We then made our third and final substitution with Tomasz Siemienczuk replacing Sam. In the seventy second minute the scoreline reached double figures as a great ball into the Staines goal area was turned home by Ogo for his second goal of the evening.

Staines then made their third and final substitution of the evening but it made little difference to the flow of the game and we scored our eleventh goal in the eight first minute. Tomasz was racing clear towards goal when he was hauled down from behind by one of Staines’s second half substitutes Shayan Nezhad when well inside the Staines penalty area. One felt that had the scoreline not have been so one sided that Nezhad might have been shown a red card as he was clearly the last defender but referee Battye kept his cards in his pocket and Tomasz picked himself up to fire past Ringer. Shortly afterwards Staines won a corner much to the delight of the home fans situated behind Hugo’s goal.

Dan then missed a great chance to get himself onto the goal sheet before we scored what was our twelth and final goal when a mix up between Ringer and a defender saw the ball reach Harry some twenty five yards out with Ringer stranded yards from the goal. Harry’s delightful chip found the empty net with Ringer racing back in vain. The referee’s whistle then brought an end to one of the most one sided games in Town’s history with a scoreline that does wonders for the goal difference being a third clean sheet in succession.