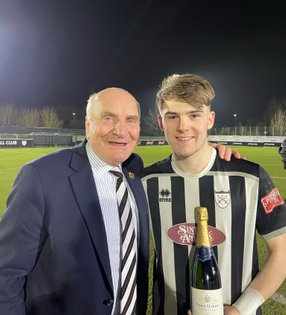 Another disappointing performance from Town, once again at home against a team well below them in the division, does not auger well for the rest of the run-in towards the play-offs. Although there seemed to be more energy and application than on Saturday there was still very little end product. Visiting ‘keepers are not getting very dirty knees at ‘The Powerday’, and that is not just because of the excellent covering of grass!

In the absence of several regular first choices Town started with an interesting line-up. There looked to be three centre backs, wing backs and two ‘in harness’ up front. Early exchanges were fairly even with the visitors being the first to threaten a goal when a free kick from Daniel Fosu went narrowly over the bar. As the quarter of an hour mark approached many in the ‘Bob Fisher Stand thought debutant Mark Nisbet had given Hanwell the lead. As on Saturday however an out of eyesight offside flag had been raised. Town were definitely looking the more likely team to break the deadlock at this stage, with Harry Rush volleying a Dan Carr cross into the side netting when well-placed and then rattling the bar from outside the area. Dan then won the ball well and provided another good ball into the box which Ogo Obi diverted wide. A Hugo Sobte ‘special’ down the field was then almost headed past his own ‘keeper by skipper Nathan Jones. Within a minute Hugo was performing at the other end of the field, out well to block a shot from Taylor Harry. As the half was coming to a close Town appealed vociferously for a penalty after Mark’s shot appeared to strike an arm, but nothing was given. Town had worked hard but not enough final passes were finding a striped shirt.

Not long into the second half Ogo went on a strong run down the left but chose to shoot from an impossible angle with team mates arriving in the box. The next decent chance for Hanwell to go ahead also fell to Ogo but he slid the ball wide when looking set to score. Then a deep cross from Dan picked out Massimo on the far post but his effort was blocked. The management used all three permitted substitutes fairly early in the half and Dernell Wynter raised hopes when he beat his man and caused a fumble from Hopwood, but the resulting corner did not lead to anything. Then another substitute, fan favourite Gareth Chendlik, went close with a header. Most of Town’s attacking was coming from the right with Dan putting a number of balls into the box that did not find a Hanwell head or boot. Right to the end Town kept pressing without seriously troubling Hopwood. A free kick from Dan was comfortably saved, a nice turn and cross from Gareth was easily cleared as was a ball into the area from Massimo. Town had strived and pressed, but had not created enough clear cut chances, and not made the most of the few that they did set up. It was disappointing!