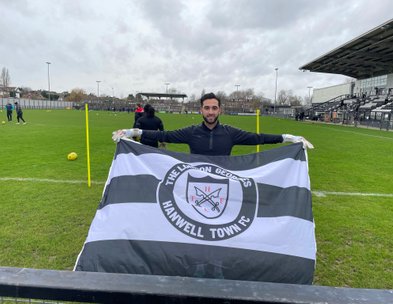 After the disappointment of our New Year’s Day game against Ashford Town being postponed at the last minute, it was great to get 2022 of the ground with a win at Tooting & Mitcham United.

Our side showed two changes from that which had beaten Northwood on Boxing Day with Sam Saunders and Harry Rush coming in to replace Covid stricken Calum Duffy and Tomasz Siemiencnczuk.

The first half of the game was bitterly disappointing for the excellent crowd of 333, so ordinary was the standard of play from both sides. Some excuse could be used for the tacky playing surface but their was no excuse for the numerous misplaced passes from both sides with the ball seemingly to be out of play more often than it was in play. There was an anxious moment for us in the very first minute of the game when a tackle by George Nicholas caused an immediate reaction from the home team swarming around the referee and it was a relief when eventually the referee pulled his card out of his pocket and it was yellow in colour not the red that we feared.

Midway through the half, a great recovery tackle by Dan Carr on Dan Williams prevented a shot with Williams right through and then Tooting’s Shakeel Morris cutting in from the left shot straight at Hugo with the goal at his mercy. Just prior to the half time whistle we were denied what seemed to be a clear cut penalty when Jack Hutchinson was brought down as he cut into the penalty area from the right but the referee not helped by his assistant who was much closer to the offence waved play on.

Whatever was said at the interval by Chris and Wayne certainly did the trick as we dominated the second half to such an extent that Hugo did not have a single shot to save throughout the forty five minutes. In the very first minute of the half, the Tooting keeper Oliver Pain was immediately in action saving Sam Saunders’s shot from distance. Shortly after a tremendous move down the right led to Dan firing in a great shot which was turned over the bar by Pain. From the resultant corner kick, Edon Pruti saw his effort from point blank range blocked on the line before the ball was scrambled to safety. Eventually we found the net to go one up in the sixty third minute. Another excellent move down the right culminated in Sam pulling the ball back from the by line into the path of Harry Rush and he swept the ball into the net from close range. Shortly after a precision free pick by Sam found Tom Collins who’s excellent volley was palmed away by Pain who was now constantly in action. In the seventy sixth minute we went two ahead when a corner on the right from Sam was played back into his path and from a tight angle he managed to beat Pain at his near post, the ball striking the foot of the goal post before rebounding into the net. With us dominating possession and completely in charge we made three substitutions in the final fourteen minutes before the final whistle was blown.