On the weekend of 11-14th of March, Hanwell made the journey to Guernsey for the first ever encounter between both teams. As you’ll hear, it was an outstanding weekend for every Hanwell player and supporter. Even the sun graced us for the majority of our visit.

The weekend started at 8am on Friday morning when seven supporters met at the Powerday Stadium for a taxi to Gatwick Airport. Although the departure from the stadium was delayed until we’d posed for a group photo in our newly acquired Guernsey Away T-shirts. 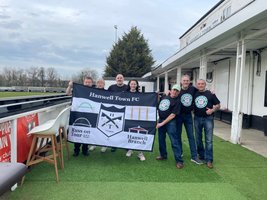 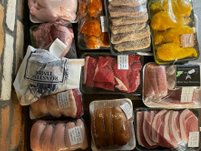 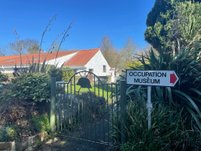 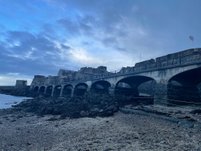 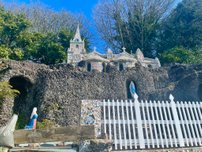 After a swift check-in at the hotel, we journeyed over to the harbour at St Peter Port where we came across the Ship & Crown pub where the highlight of the evening was winning the local meat raffle not once but twice!

Saturday morning, for some, involved a number of cultural activities including The German Occupation Museum and The Little Chapel. Both were within a 10 minute taxi ride from the hotel. The German Occupation Museum was great, very informative. We'd recommend it to anyone visiting Guernsey, the gentleman who runs it is very helpful and everything in there has been collected by him or donated. Please note, they don't accept card, so bring cash! The Little Chapel was incredible measuring 16ft by 9ft it is one of the smallest chapels in the world! The Chapel is about five minutes drive from the museum and has a great gift shop.

On Saturday afternoon we were joined by the players, the committee and more supporters to make a grand total of 49 people to represent Hanwell Town for the match the following day. The boys seems to settle in nicely - see pictures!

The afternoon involved watching Liverpool win 2-0 against Brighton in a pub called The Doghouse which was five minutes walk from the hotel. This seemed to become the location of many a story over the weekend but what happens in Guernsey stays in Guernsey apparently. The most memorable event did however require a few steri-strips and involve a somewhat hazy recollection!

On Saturday evening the players and committee had dinner in the hotel followed by a quiz kindly put together by our Club Secretary, Clive Cooke. The quiz consisted of five rounds: the laws of the game; team nicknames; premier league captains; a picture round; and football trivia. The quiz was won by ‘The Pizza Boys’ made up of Harry Rush, Hugo Sobte, Gareth Chendlik and Dwayne Duncan.

The most amusing answer was that one team, who shall all remain nameless, mistook a photo of our youthful President, David Iddiols as Steve Bruce. The most perplexing question seemed to be - How many footballers have scored 100 or more goals in the premier league? (answer given below) 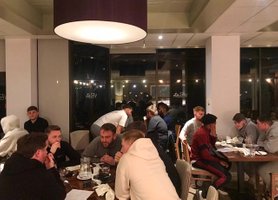 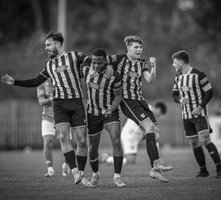 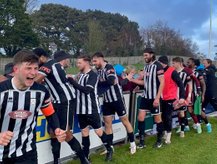 Sunday morning mainly consisted of a lie in followed by a swim and sauna and rounded off nicely with a cooked breakfast - the latter for myself anyway. The game commenced on Sunday afternoon at 2pm on a totally sun drenched pitch and our flags were out in force! The first goal was scored by Guernsey in 18th minute but it was soon followed by two goals from our Captain Harry Rush in the 25th and 29th minute. The latter after a fantastic ball in from Dan Carr - Danny’s Hanwell Magic, He wears a Magic Hat etc. Ogo Obi replaced Gareth Chendlik in the 75th minute and then proceeded to score a goal in the 81st minute. Not to be outdone, Tom Siemienczuk replaced Dernell Wynter, also in the 81st minute, to score himself in the 90th minute. The full time result was therefore 4-1 after a further four minutes of injury time.

At the end of the game all of the Hanwell players, managers, coach and physios came across to the supporters behind the Guernsey goal to celebrate the win and thank them for making the journey. It was a such a great moment that it has been continually mentioned during the following weekNeedless to say everyone went home grinning from ear to ear whether it was Sunday evening, or Monday afternoon in the case of the The Hanwell Massive!